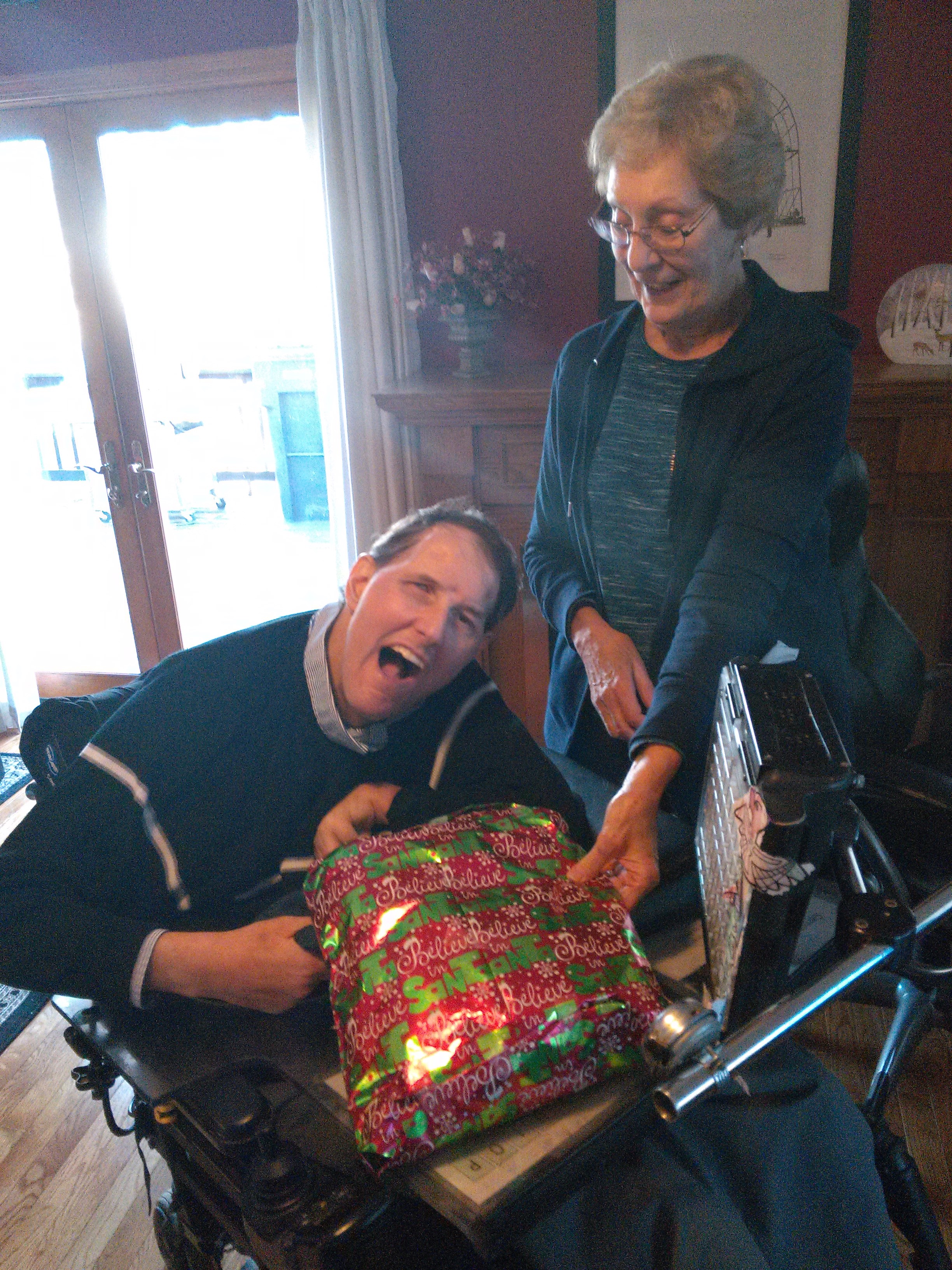 Being an advocate is not easy. Even after 40 years, Rhea still finds it difficult, and understands why many parents don’t do it.

“It’s hard because all parents are exhausted,” Rhea says. It’s hard to think about advocacy work on top of caring for a child, especially one with a disability.

Rhea is an advocate for her son, Ted, and works closely with parents and local organizations to push for better funding and services. Her work has helped Ted, others with disabilities, and direct care professionals.

As a parent of young children, Rhea did not foresee a life of advocacy for herself. One day, more than 40 years ago now, the Gallagher family’s world changed forever. At seven years old, Ted had a brain aneurism, leaving him as a wheelchair user with quadriplegia able to move just his right arm and hand, and without speech.

As Ted grew older, Rhea began to encounter obstacles when searching for solutions to meet his changing needs.

For the early part of Ted’s life, he lived at home full-time and attended a school for children with disabilities. Rhea would adjust her work schedule to match Ted’s school schedule, which allowed her to help him on and off the bus every day. One afternoon, Rhea came home at her usual time to discover Ted already inside the house – an unsafe situation for him due to the nature of his disability. Ted’s bus, which was provided by the town, was supposed to keep a specific schedule so Ted would never be alone in the house. Alarmed by the situation, Rhea began working with the town to create a better, more secure transportation option for Ted. This was the first of many times that Rhea would step in to ensure Ted’s safety.

Although his family did their best to care for Ted at home, they eventually realized it was time for him to move into a residential program with around-the-clock care. At age 14, Ted moved into his school’s residential program which allowed him to continue learning and to be more social with his peers.

Ted and other classmates remained at the school after graduation, but as more new students began living there, space for alumni began to shrink. The school staff met with parents to discuss the options available for adult residential care, which were limited at that time.

Rhea and her husband were presented with a choice of two options by the school: a nursing home or a state institution. They decided to visit the suggested nursing home to see if it would be a good fit for Ted but were shocked when they discovered the conditions of the home. After making the living conditions known to the other parents, everyone was adamant that they not send their children to an institution or nursing home.

Listening to the parents’ concerns, Massachusetts Department of Developmental Services (DDS) became involved and helped find alternative residential options. At age 27, Ted moved from the school into an Advocates home. Today Ted lives a happy, fulfilling life – he visits with his girlfriend, goes out with his parents, and spends time with his housemates in the community and at their group home.

Even after Ted was settled, Rhea never stopped advocating: “I always felt guilty because Ted needed so much help from people besides myself. I always felt like I should do whatever I could do.

“What I really felt bad about was staffing [and] how low their paychecks were.” Rhea’s next move was perhaps one of her biggest: trying to increase wages for direct care staff.

Every year, she and other advocates consistently called legislators to push for better funding and wages. After a few years, DDS and many of the Massachusetts agencies and vendors joined in and successfully raised the pay for direct care workers to the minimum wage.

Rhea has reflected upon her life as a caregiver and has a message for others.

“Caretakers definitely need to know that it’s okay to [need] something for yourself,” says Rhea, remembering her experiences raising Ted and his brother, who does not have a disability. “You just [go] from morning until night. You never [think] that you might need a break…and that becomes a problem.”