Many in the Woburn community know Advocates Warren House resident Jim as “backwards Jim.” Jim, whose favorite hobby is “cruising around” town, has been known to push himself backwards in his manual wheelchair.

But “backwards Jim” is just Jim lately, since he gained responsibility using his power wheelchair.

Previously, Jim had a habit of taking his power wheelchair all the way into Boston, where staff would have to pick him up when the battery died. Because of this, Jim was encouraged not to use the power wheelchair for a duration, but after a few weeks, he was eager to get it back. Together, staff at Warren House and Jim’s father agreed to let him have a trial run with the power wheelchair, and he has exceeded expectations.

“It’s such a proud moment,” says Warren House Program Director Amanda St. Amant. “He’s been so good with everything. He’s home by 10 o’clock, he lets staff know where he’s going, he charges the wheelchair.” 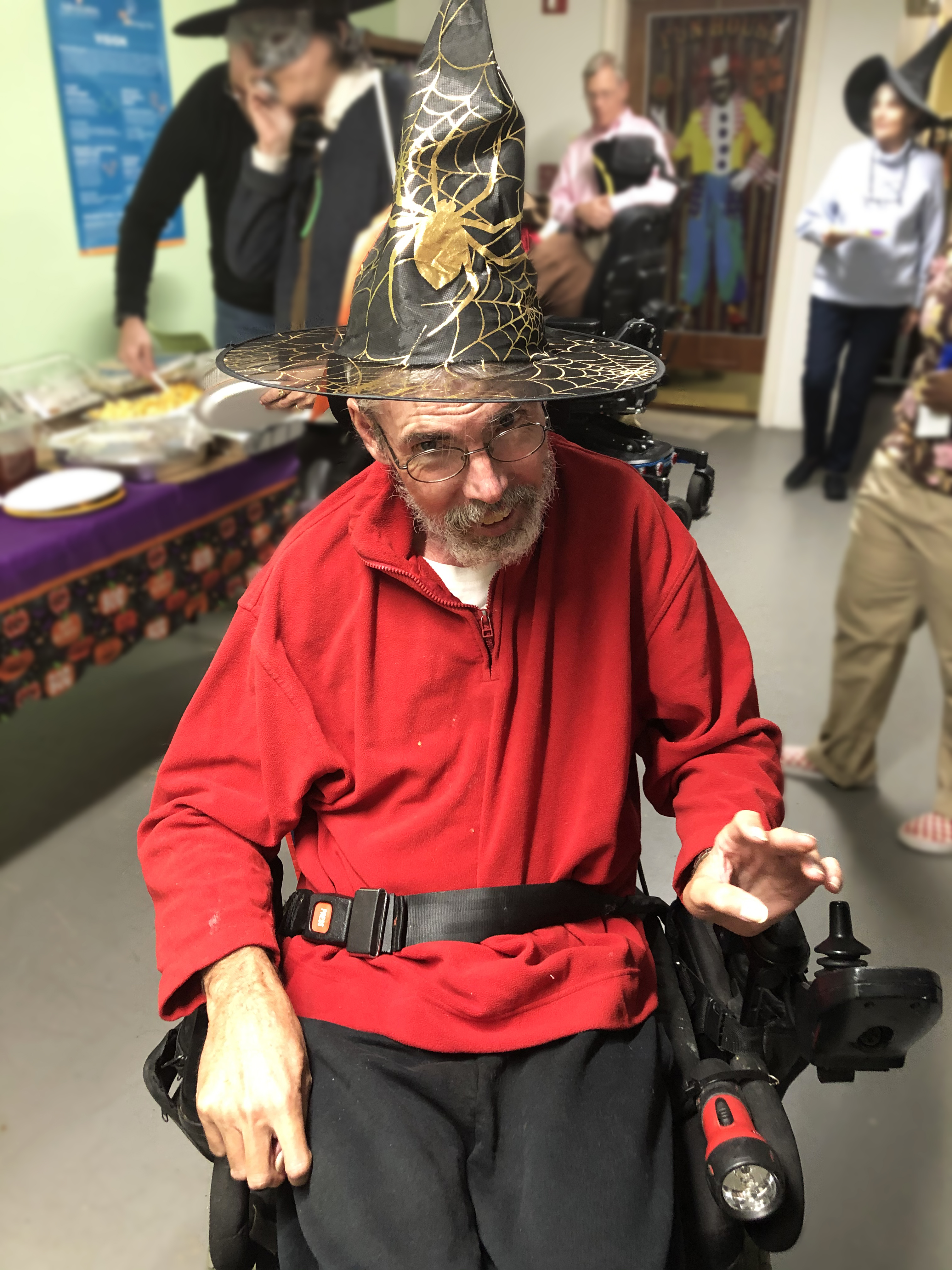 Before coming to Warren House, Jim lived with his father, but says he is much busier and has more fun at Advocates. An avid sports fan, Jim attends a Red Sox game every year with other members of the program, and this year he celebrated his birthday by going to a Bruins game. Other activities include holiday parties, like the most recent Halloween party where Jim donned a festive witch hat. Music is another love of Jim’s, and he can frequently be found listening to The Rolling Stones in his room or attending community concerts in the summer. When the weather is nice, most of his day is spent “cruising around,” and he never misses his daily Dunkin Donuts run. Jim values the independence he gets at Warren House and the trust that the staff have in him.

Warren House is part of Advocates Supported Living Program (SLP) for adults living with acquired or traumatic brain injuries. The program operates three residential communities, where Jim and others live in apartment-style, home-like environments that have been carefully designed to meet their needs. With the help of 24/7 staff support, individuals can actively engage in the community, attend social and recreational activities, gain independent living skills, and set goals to lead a full and meaningful life.

From Amanda’s perspective, the community at Advocates is what sets it apart from other Brain Injury service providers. “It’s just a close-knit community,” she says. “That’s how I feel here at Warren House and even at Douglas House and McLaughlin House, whenever you go there you just feel welcome. We’re all just working together to strive to make everybody’s lives independent.”

Funny and friendly, but often misunderstood, Jim wants people to know that he is just like everyone else, saying playfully, “I’m amazing.” So if you’re ever out in Woburn and see Jim cruising around, don’t be afraid to say “hi,” or maybe even strike up a conversation about sports or The Rolling Stones.