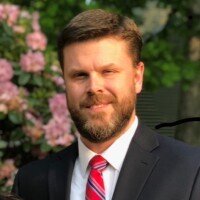 Bob Hallion is known for being a passionate leader, trusted advisor, team player, and handy man. Before working his way up to Director of Operations for Behavioral Health Services at Advocates, Bob began his career as a pharmacy technician, where he regularly worked with direct support staff from one of Advocates' residential programs. Impressed with his knowledgable and helpful nature, the program director convinced Bob to come work for Advocates.

After just 6 months, Bob was promoted to program manager due to his constant good nature, rapport with residents, and can-do attitude. In his new role, Bob motivated and inspired staff to do their best work, while providing compassionate care to residents. He made such an impact that when he chose to pursue a position in Quality Management, the residents joined together to write a letter insisting he stay.

As Bob's career at Advocates continued to progress, he became a trusted advisor to many, known for finding creative solutions to complex challenges. At the heart of Bob's impressive career is his compassion and commitment to the people he supports. He continues to visit an individual who left Advocates nine years ago and now lives in a nursing home.

Colleagues know Bob as someone who is always willing to lend a helping hand. It is not unusual to see him lugging his personal toolbox at work – assembling desks for new employees or hanging white boards in conference rooms.

"Bob does what is needed, when it is needed, and for anyone who asks for his help," said Brenda Miele-Soares, Vice President of Behavioral Health Services.

When asked about his career path, Bob had this to say, "I have chosen to devote my career to Advocates because the most important thing to me are the members that Advocates supports and the staff providing that support. It is my great privilege to be part of the Advocates community."

In recognition of his many accomplishments and unwavering commitment to his work, Bob received the Excellence in Program Leadership Award from the Association for Behavioral Healthcare in October 2020.